My daughter is nearly 3 years old now. When she was about 2yrs old, I noticed something very interesting. She had been barely walking for 15 months and now here she was, trying to balance herself on a narrow divider that divides the garden and the walking area. The divider was just as wide as her feet and about one foot tall (one foot is a lot when your whole height is ~85cm). She did not progress much before she called out for my help, but the courage that she demonstrated in just going ahead and trying it out put me into thought. I had to do something to let her be more adventurous, yet safe. Incidentally, Radhika (my better-half) had found a great carpenter. I quickly designed something that was inspired by the ramp walk obstacle in the obstacle coarse we had at school (It’s another of those Sainik School things that non-Ajeets may need more explanation on. Don’t bother). The carpenter quickly got on with his job, and in less than a week from conceptualisation we got this – 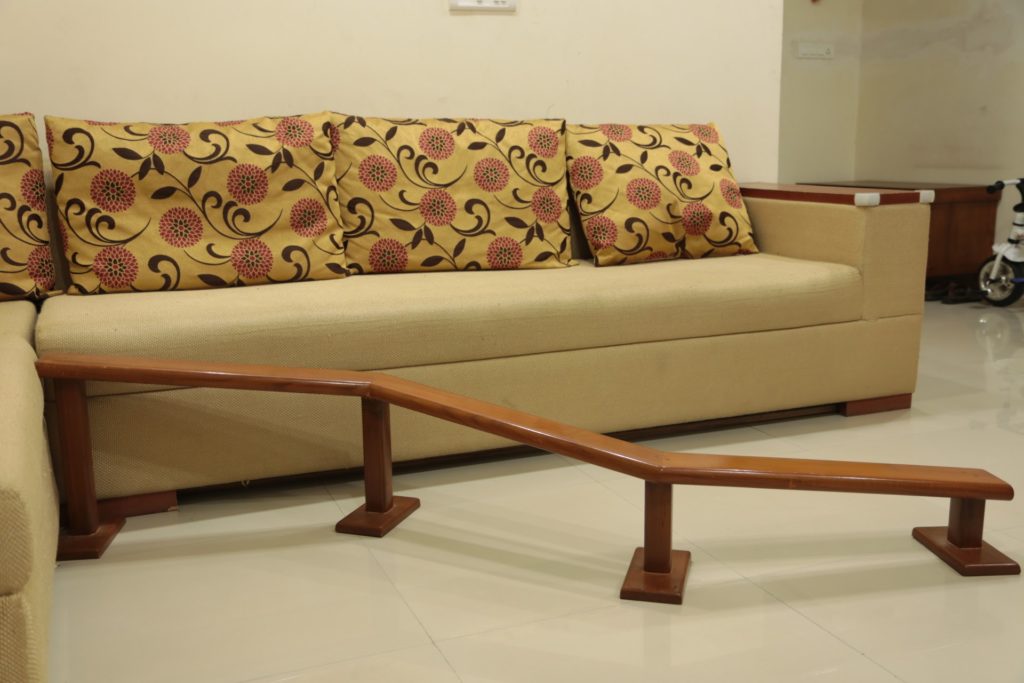 The experiment proved very successful. Within a week, Anu could go end to end –

She fell innumerable number of times before getting to this stage, but thanks to some cheering, she kept trying. Once she mastered walking, as expected she started challenging herself; Running, turning around, jumping in place, jumping forward and a lot more. More importantly, the beam provided her a platform to fail over and over again, overcome her fear and succeed. For those who are interested in replicating the setup, the material used is Indian teak and here are the dimensions –

Take care to round all corners. The one that we made is sturdy enough to support an 80Kg adult. Do test thoroughly before letting your kid try it.

Between the last blog and this one, I have travelled to Shenzhen another 4 times.  I have survived through one typhoon and multiple flu episodes during the same time in Shenzhen. The construction landscape is so dynamic that the city manages to have some surprise in store every time I land. The last time I visited the place was in mid January (this month).

For any person living far away from Mainland china, the best way to get in and out of the city is to catch a flight to HK airport and use the ferry. They now have an all new swanky port at Shekou!  Try to avoid having a checked in baggage to save precious time. For most part of the day, the ferries are 1 hr apart. It does not matter whether you have a checked in baggge or not, you have to have about 2.5 hrs of margin time between the flight landing time and the ferry departure time. The ferry takes only about 20 mins to cover the distance between HK airport and the Shekou port, but rules are rules. Immigration is a breeze. From the new prince bay port at Shekou, one can take a shuttle to go to the old port. Metro station is closer to the old port. Taxis and buses are also available at the new port.  For departures from HK airport, arrive 4 hrs before scheduled flight departure at the Shekou port. You can choose to check the baggage in at HK airport or at the ferry terminal itself. Be sure to carry Chinese Yuan (Remnibi) to the port (I have had one hell of an experience by not following this guideline, and that should make for another story). They do not accept any card (including union bank card for the smarties who are reading this, smiling and saying “I have a Chinese bank account and a union bank card!! he he he!”) and there is no ATM at the new port as of today. Do not forget to visit the airlines counter once you get to HK airport to collect your tax refund coupon of 120HKD which you can avail at the tax refund counter!

Inside the city, metro is the best way to commute. Choose an accommodation that is near a metro station; ideally near a metro junction such as “The windows of the world” station. Airbnb should work fine, but take care to report to a nearby police station and register yourself (They freak out if you are a foreigner who is off the radar. Read the instructions on your landing card for updates on this). Buy a Shenzhen-HK Tong (metro-card) to make your life easy. It looks like the image below –

It costs 50 Yuan and you need to add additional 50 Yuan at the minimum to start your commute. It is totally worth it. It works from a couple of cm. So you need not pull it out of your wallet to swipe. You may need to visit a major station such as “The windows of the world” to buy this card.

Shenzhen grows faster than it’s metro. There are many places worth going where the metro won’t take you. For all such places, use Didi (Chinese equivalent of Uber). I have very rarely needed to take a Taxi though. Shenzhen is relatively free from pollution (compared to Shanghai or Beijing); Whenever I get a chance, I walk.

I have not needed to take a bus so far (other than the free shuttle from prince-bay port to older Shekou port). So I can’t speak much about it. But, given the reach of the metro, metro + Didi works just fine.

Metro : The Shenzhen-HK Tong is so passe now. Wechat is the new cool tool that solves just about everything in Shenzhen. I will cover the wechat howto in another post. The Shenzhen-HK Tong is still good to have as a backup when you run out of juice in your mobile phone. I had this one situation when I checked-in into a metro station using the phone, but the phone died before I got to the destination station. I just walked up to the help center and explained in broken Chinese + English. But they probably understood the sign language more than spoken words. The guard at the metro was quite helpful. He pulled out a map and asked me to point to me starting station. I had to then pay the remaining amount using my Tong and was let to go. Could also pay using cash here.

Commute to HK airport: Ferry is still my favorite. All the more so because of the unrest in HK. Almost all of the points mentioned above hold true. The port has become better though with more facilities.  There is finally an ATM at the port and the ticket counters now accept Wechat or Alipay. But there are times when Ferry is not an option. The first ferry starts at about 7:00AM. Check the latest timetable here. So if one has to catch a flight before 11:00AM in the morning, Ferry is a risky option. In such cases, going through Huanggang port makes more sense.

The total journey to airport after you reach Huanggang port can take anywhere between 1.5 hrs to 2.5 hrs. This includes wait time, immigration time and the transit time. So please keep margins accordingly. Typically you are in good shape if you are at the port 4.5hrs before the departure.