As always, opinions are quite divided about Modi and the change he will bring about. To some he is the silver bullet for all the problems that India faces. To others, he is the next Hitler who is going to exterminate all Muslims. There seems to be hardly anyone around who is taking a more pragmatic view of the man.

In 2002, I chose to do my graduation in Gujarat. I did so, very well knowing that it had witnessed one of the worst plagues in 1993,  an earthquake in 2001 and one of the worst riots in 2002. The reasons were simple. There was some fascination about Gujarat. The land of Mahatma, Sardar and now Ambani. The land from where all good/bad was imported into India. East India company had it’s first base in Surat. Parsis came in from Gujarat and the list goes on.. My close relatives were like .. “Are you crazy??, You want to get yourself killed?”. When I landed in Gujarat in Sept 2002, I felt vindicated. Surat was very different from anything that I had seen in Karnataka (including Bangalore). As they say, there was some energy in the air. Even the chicken center guy outside the college had something that you could learn from. Entrepreneurship runs in their blood.

Coming back to Modi.. There was some unmistakable efficiency about everything that happened around us. I saw the road in front of  our university getting converted to a concrete road. It was done in 3-4 months flat. In 2014, in the heart of Bangalore, I see that a much smaller section of road is getting converted to concrete since 1.5 years and is still in pathetic shape. Roads used to be always damn clean! And interestingly, I had not seen any sweepers in the morning. One day, on one of our early morning outings at about 4:00AM, I realized that the sweepers come in very early and swank it up well before the wake up alarms go off. Modi started the now famous Biennial Vibrant Gujarat programs. These programs are conducted in a different district each time and have a very energizing effect on the business in the chosen districts. I was lucky to witness the one in 2005 as it was in Surat. Come Navaratri every year and you could actually see what ppl outside Gujarat talk about. Girls on scooties go around without fear at midnight. Crime rates in Gujarat have always been among the lowest in India. Occasionally, you would hear a crime related to the diamond market (It is not surprising given that more than 85% of world’s diamonds are cut in Surat). But that’s about it. In 2006, the notorious Tapi flooded Surat for the n’th time. I visited Surat for the convocation ceremony 3 months after the floods and I could not see any tell-tale signs of the flood. A similar occurrence in Bangalore would have crippled the city for months.

On the whole, while it looked like while Modi was an able administrator, it is hard to pick faults in his predecessors, as Gujarat was almost always a front-runner on any good statistic. His specialty comes in the way of small innovations he does to make things more efficient. He is also  special because he works exceptionally hard. He has no family to run and works 24×7. On the negative side, it is hard to believe that he had no active role in the Gujarat riots. See this video and tell me he is doodh se dhulahuwa (A phrase in Hindi which means pure, washed of milk).

India is much more diverse than Gujarat. Moreover, Modi took reins of Gujarat when Gujarat was already doing good. It is easier to take good to better than it is to take bad to good. It is unfair to expect some magic in 5 years. But, mind you, he is very good at making small changes that are directly visible and will win him votes again while working on longer term improvements in the background. It is this trait that makes him a very good politician apart from being a good administrator. Also, considering Modi’s political maturity, I am sure 2002 won’t happen again. When 2002 happened, he was a political fledgling and had almost nothing to lose and everything to win. Now, with one bad move, he has everything to lose.

In summary, the road to glory looks like a long one and Modi will hopefully take us there without any events that we would want to forget about. Eagerly waiting to see a more vibrant India in 2024 voting Modi back to power.

Flutes are probably the oldest of the man-made musical instruments. A cut bamboo might have served as the first resonating column and the wind, the first flautist that inspired a passerby nomad. My guess is that the first flutes probably looked like the pan flutes shown below –

This kind of transverse flute was independently invented by the Europeans and the Indians. The association of flute with Krishna (Indian god and an Avatar of Vishnu) indicates that this instrument was already quite popular around 2000 BC. Given that Krishna was a cowherd and played “cool” folk tunes for Gopikas, Krishna’s flute was probably closer to the relatively short south Indian Venu or the smaller versions of Bansuri than the modern north Indian bass Bansuri. Infact, it took nearly 4000 years before the Indians reinvented the Bansuri. Pannalal Ghosh(1911-1960) was one of the first musicians to employ the Bansuri for serious Hindustani Classical Music. In the process, he experimented with the bore size, number of holes and the length of the flute to invent the bass Bansuri that I am going to describe in more detail in this article.

A typical Bansuri covers 2 octaves. Depending on the construction quality and the bore size, some notes of the 3rd octave can be played too. Smaller bore sizes allow reaching higher octaves. Why? Smaller bore size means lesser volume of air. To sustain the standing waves in the flute takes a lot of energy. And to sustain notes of the higher octave takes even more energy. Therefore, with lesser volume of air, the higher modes of vibration become more viable.

What is this D4?? This is the lowest note that this Bansuri can play (technically, there is one more lower note, but this where the transposed C starts for this flute. In other words it is the scale of the flute). In Indian musical terminology, this would be Re. The fundamental frequency is 293.66Hz.

The Bansuri like all other flutes uses a resonating column of air to produce the various notes. The blowing end has a cork that blocks the energy from escaping from the blowing end. The other end is the first open hole. The fundamental mode of resonance has nodes on both the ends and just one antinode in between. Therefore the length of the column is half the wavelength. Here is an interesting puzzle..  If you actually measure the distance between the open ends, multiply this distance by 2 and name the value is λ, divide the speed of sound (c)by this λ, you would get a frequency that is higher than the note that you hear when you blow. Infact, when I tried this, I got an error of 10% !!!. Engineers like me would be jobless if simple mathematical models worked. Thank god, they don’t. The devil is always in the details. The actual phenomena is much more complicated than the simplistic theories of a both ends open pipe. For starters, the energy does not escape efficiently from only one hole. The next hole plays a part too. To test this, I tried closing the next hole and got a variation in the frequency. This proves that the simplistic assumption that only the closest open hole plays a role in deciding the frequency is wrong. Therefore, it means that the effective length of the column is actually more than the distance between the blowing hole and the first open hole. Experts who make flutes have to take this into account among several other such non-idealities. It is no surprise that a good concert Bansuri sometimes costs more than 10x that of a normal one.

To be cntd… The most important part – Playing the Bansuri

I became a father on 22-Apr-2014. As per the prevailing superstitions in India, one is not supposed to shop for a cradle till the baby is born (Nobody mentioned anything about making one 🙂 ). I made part of the hammock ready before the d-day. Got rest of the act together in a couple more days. My princess loves it. Cumulative effort including this documentation was about 6hrs (The 6hrs don’t come easy as babies keep everyone busy all the time)

First find a suitable place. Make sure the hook is strong enough and well supported. Hang S-links from the hook so that regular links can be then added. 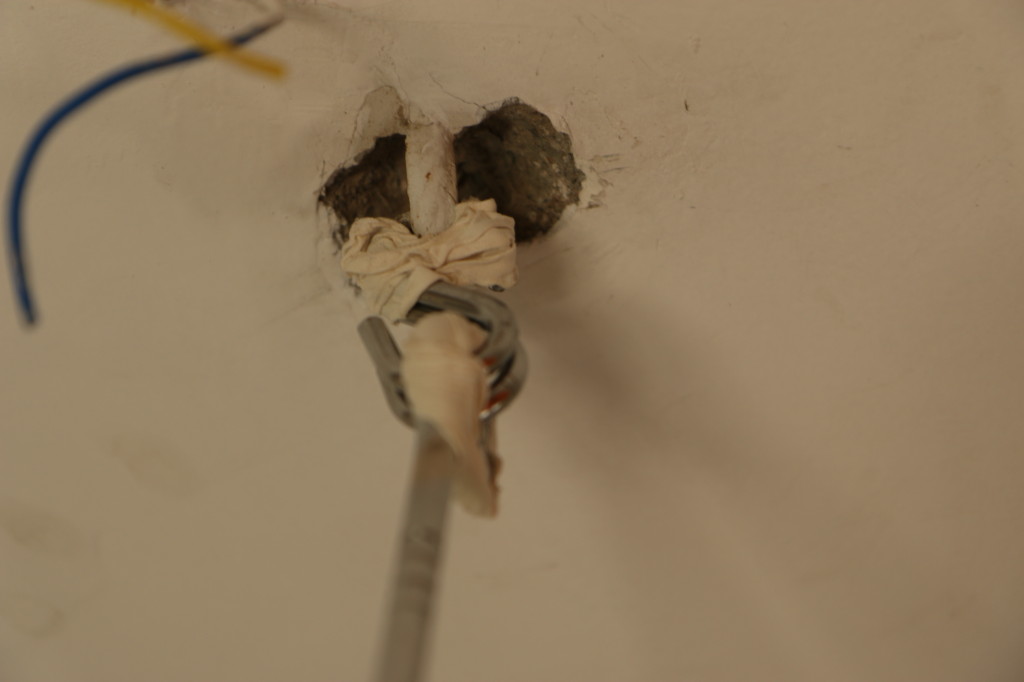 Add as many links as necessary to get the right length.  If necessary, add a ring at the end of the links to connect to the springs. 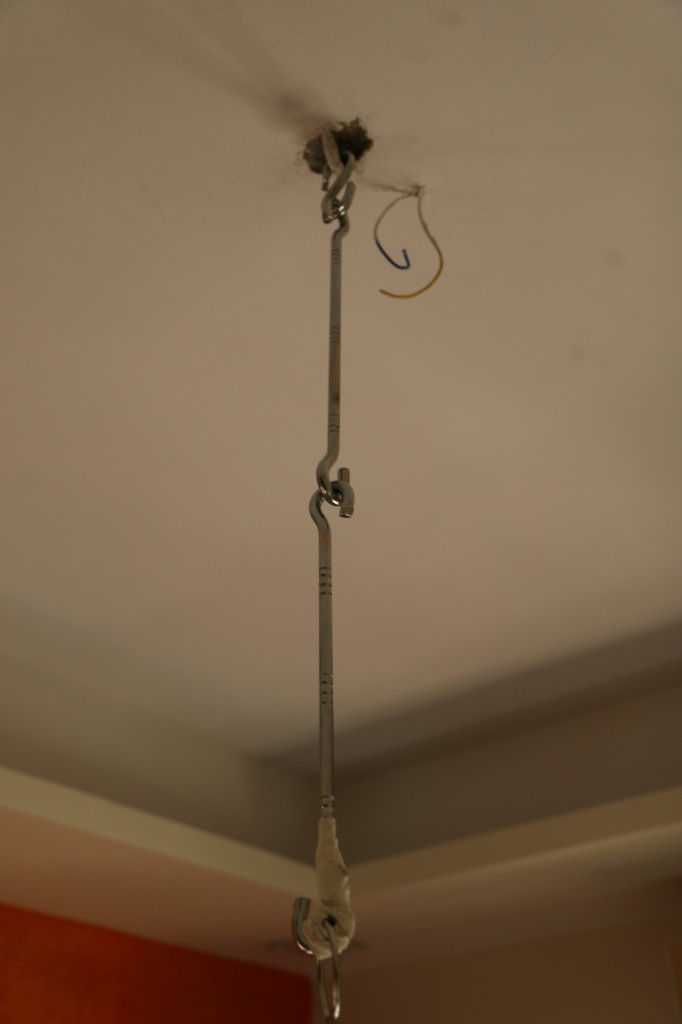 Add springs. Choice of the springs is the most important part of the hammock.  The effective spring constant has to be such that the assembly stretches neither too less nor too much. A good rule of thumb – A stretch of 15 cm with about 5 kgs of load gives decent results (Natural frequency of about 2Hz with a 3Kg newborn which will drop down to about 1.4Hz in 4 months  when the baby will be about twice the birth weight).  Pune being an auto-hub, made my life easy. I got these automobile springs within 10 minutes of search. 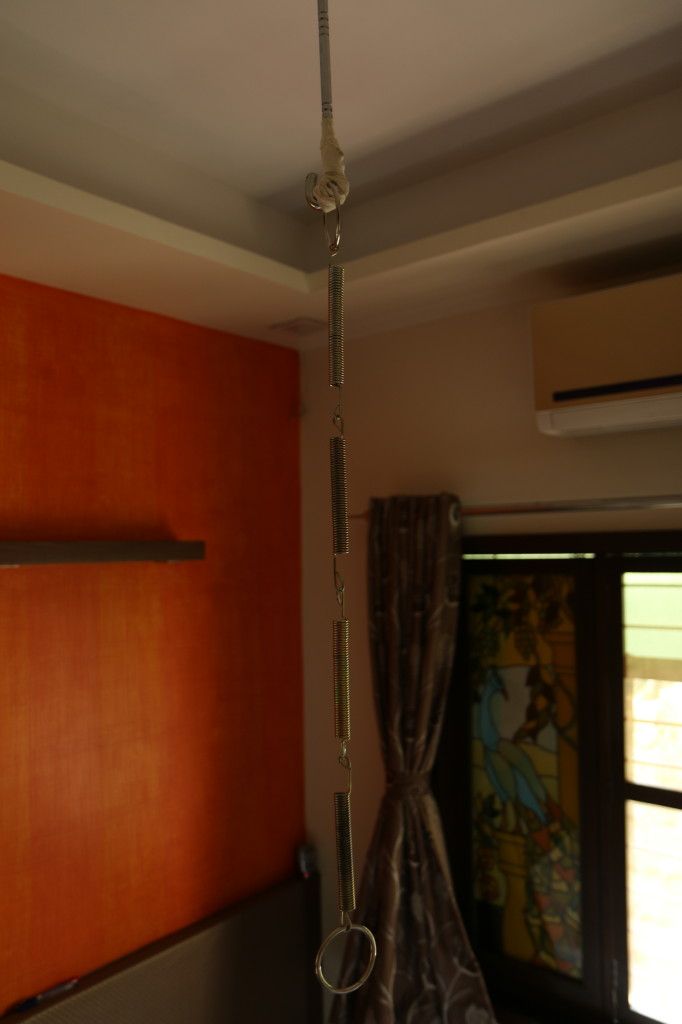 Make sure the springs are secured properly. 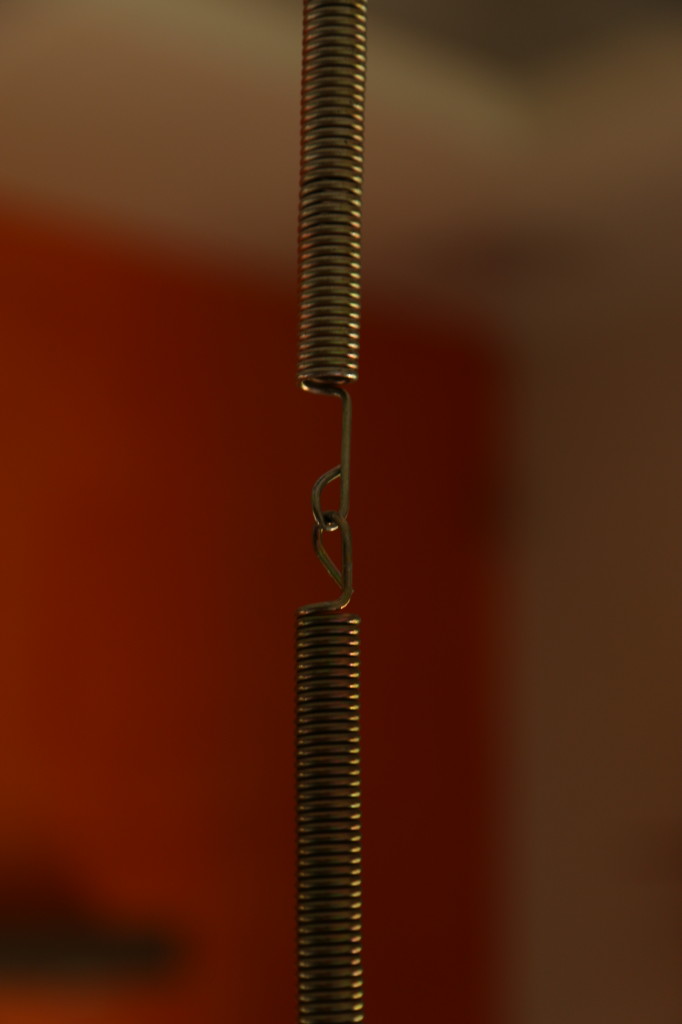 You may want to add one more ring at the end  to connect to the hammock hanger. 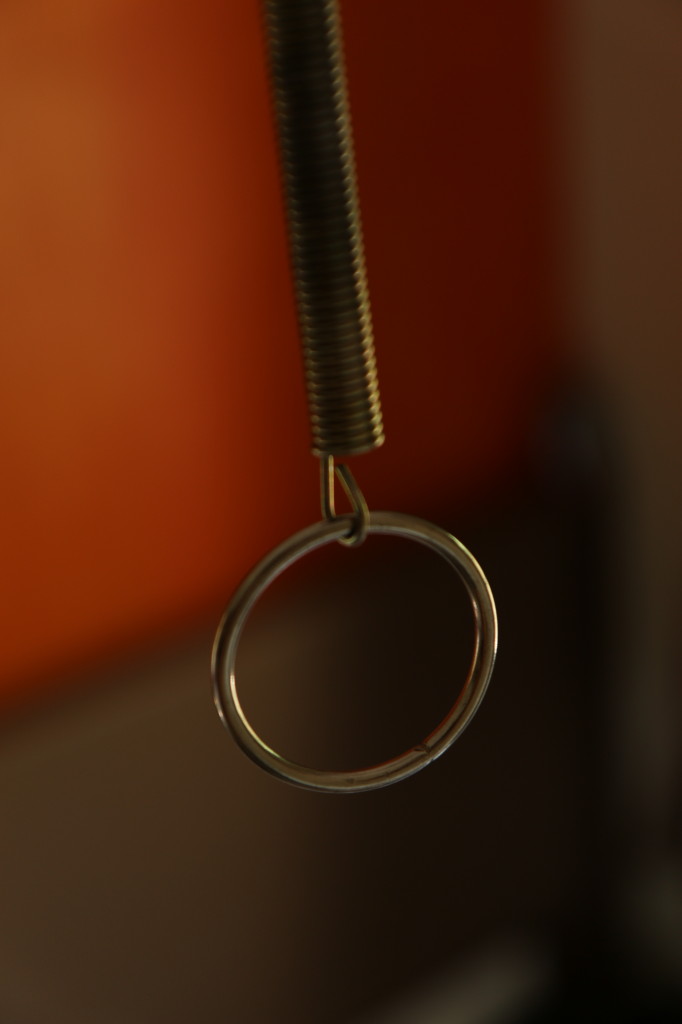 Since it concerns babies, it is better to put in some safety measures. The springs are the weakest link in the design. To be prepared for contingency, additional flex cables can be used to connect the top and bottom ring. The flex cable length should be such that there is no tension in the cable under normal circumstances, but when the springs fail, the cables should hold. 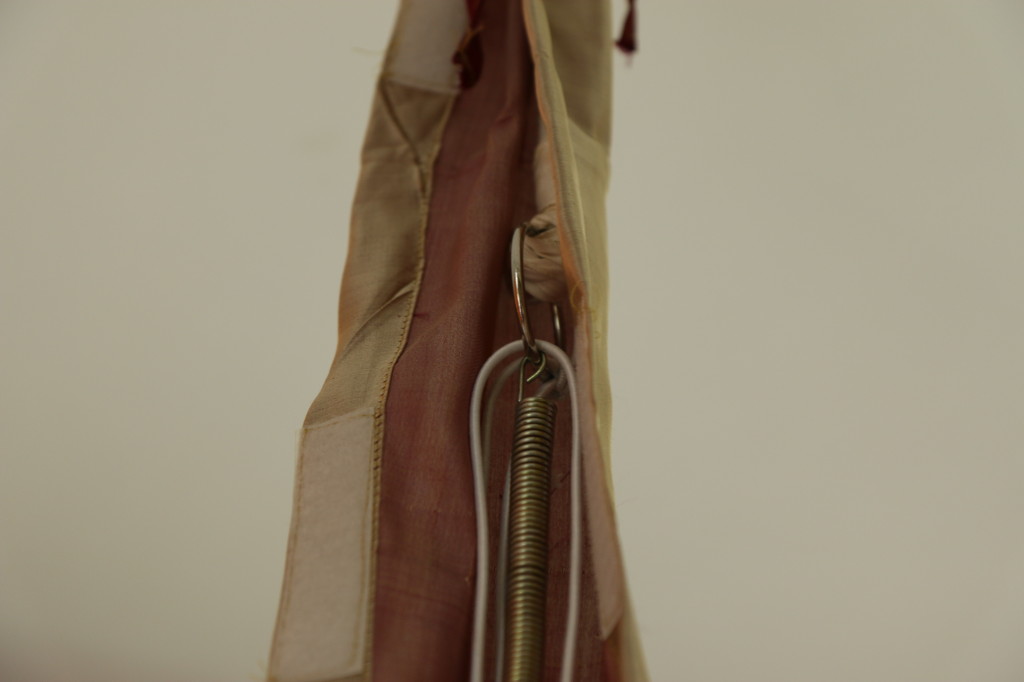 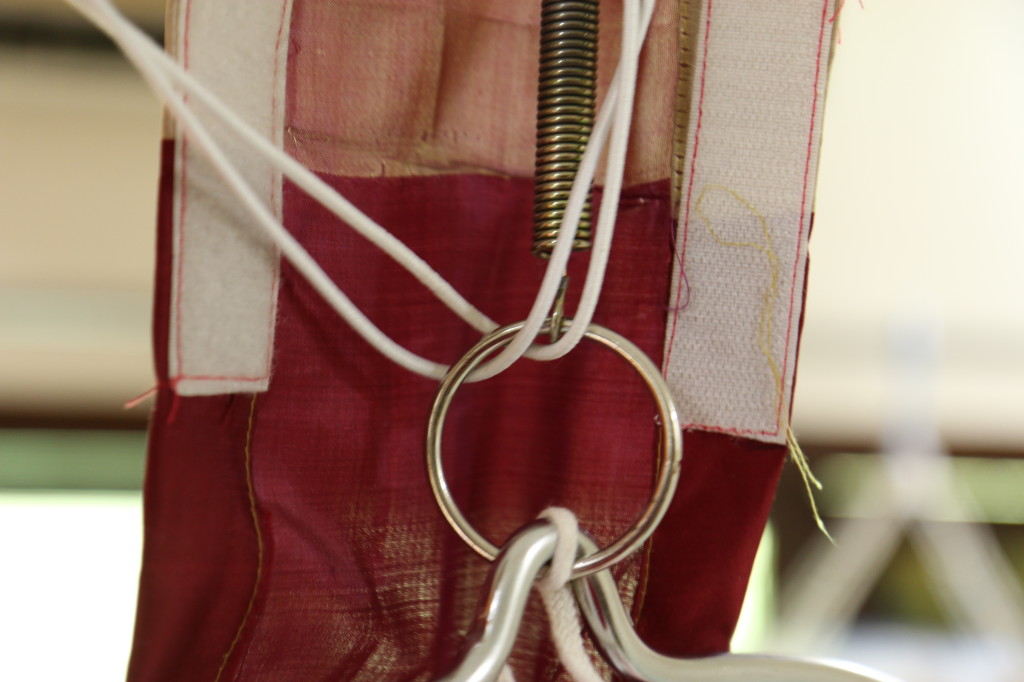 Find some hanger like component to hold the hammock. I found this nice hanger shaped steel rod. Use some thread to secure the hanger to the ring. 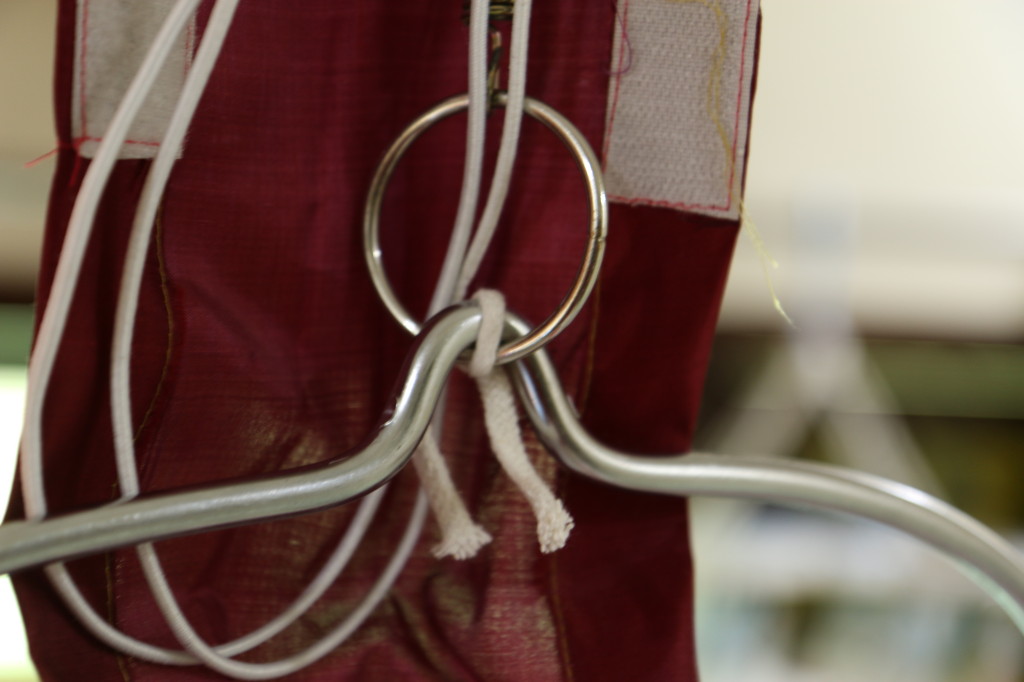 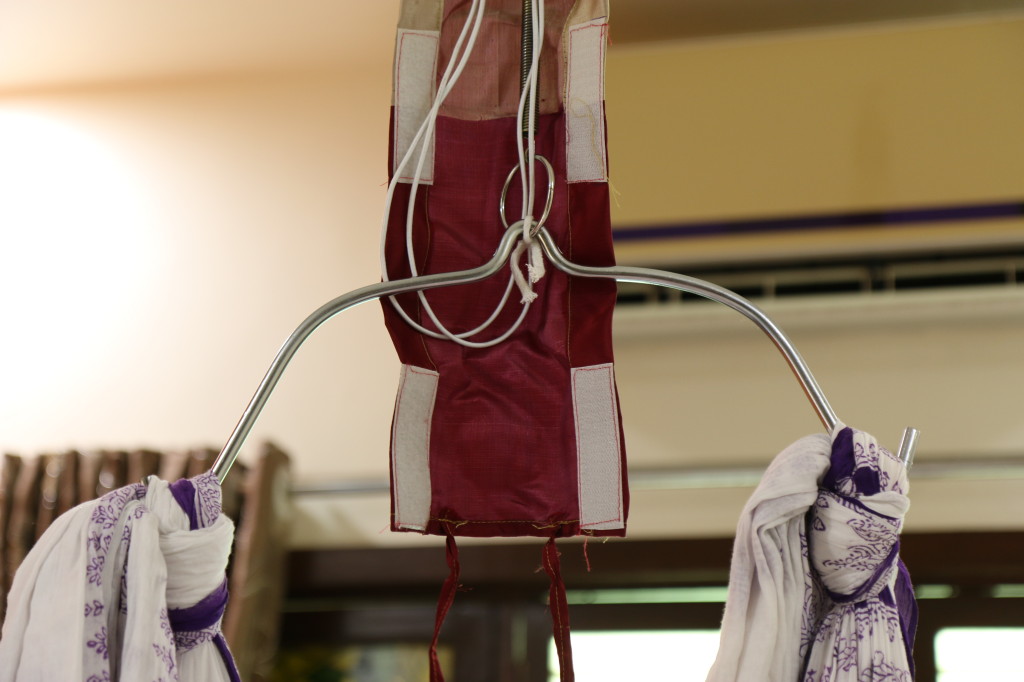 Use a nice cloth to cover up the not so nice looking mechanics. It is important to uncover the cloth and inspect the whole system atleast once in a week. 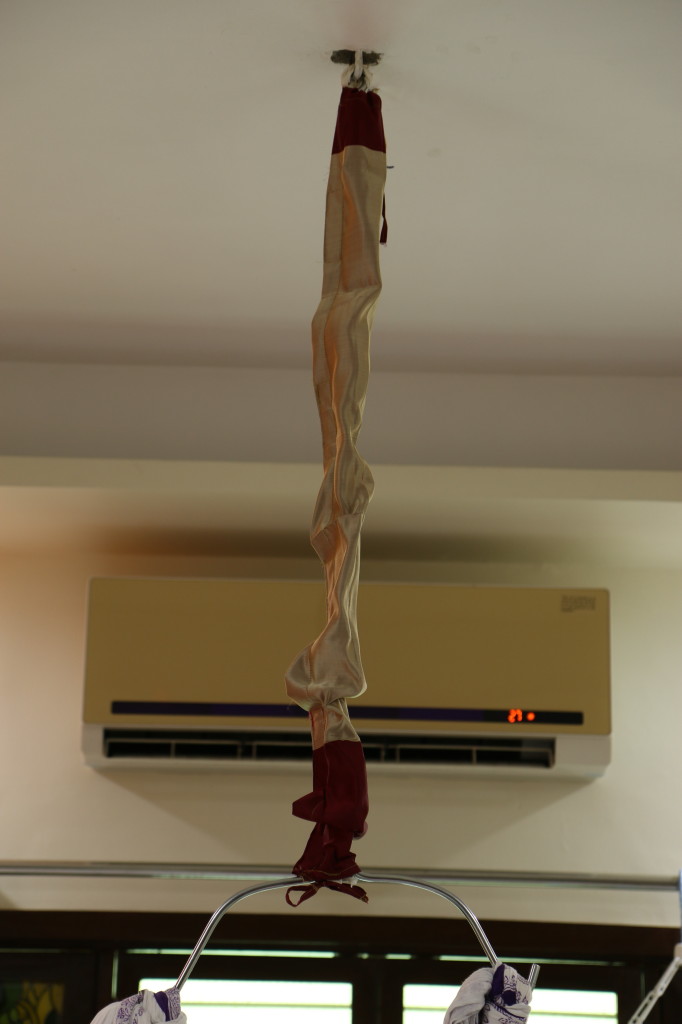 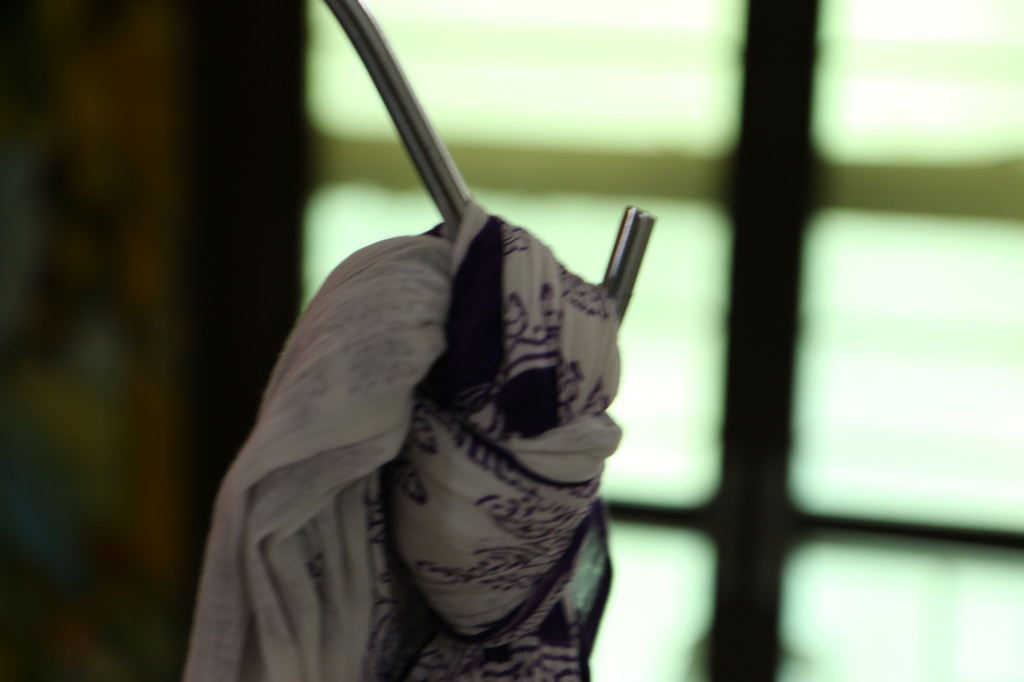 This is how it should look.. 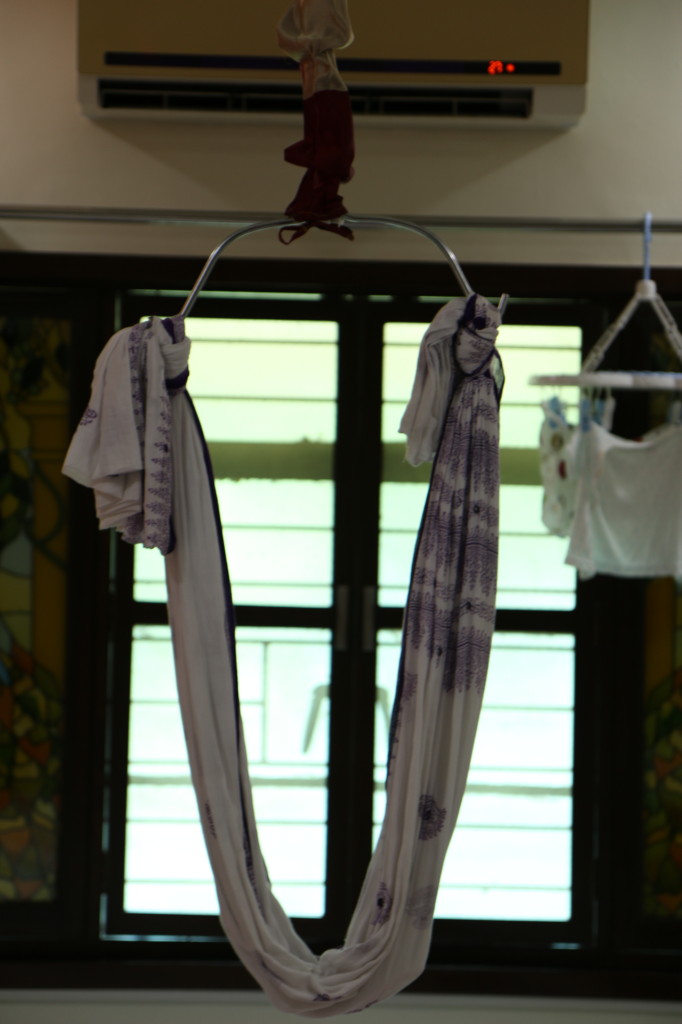 The hammock is ready for action!! 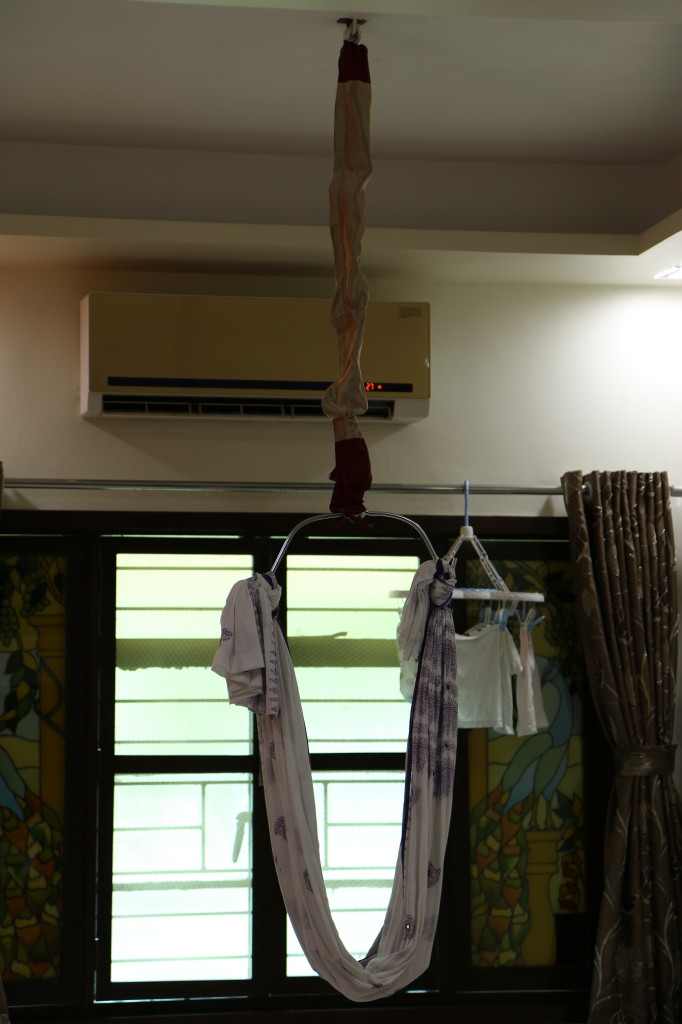 But wait! Use atleast 10kgs to test the whole structure for 1-2 hours. Place the baby only after thorough testing. 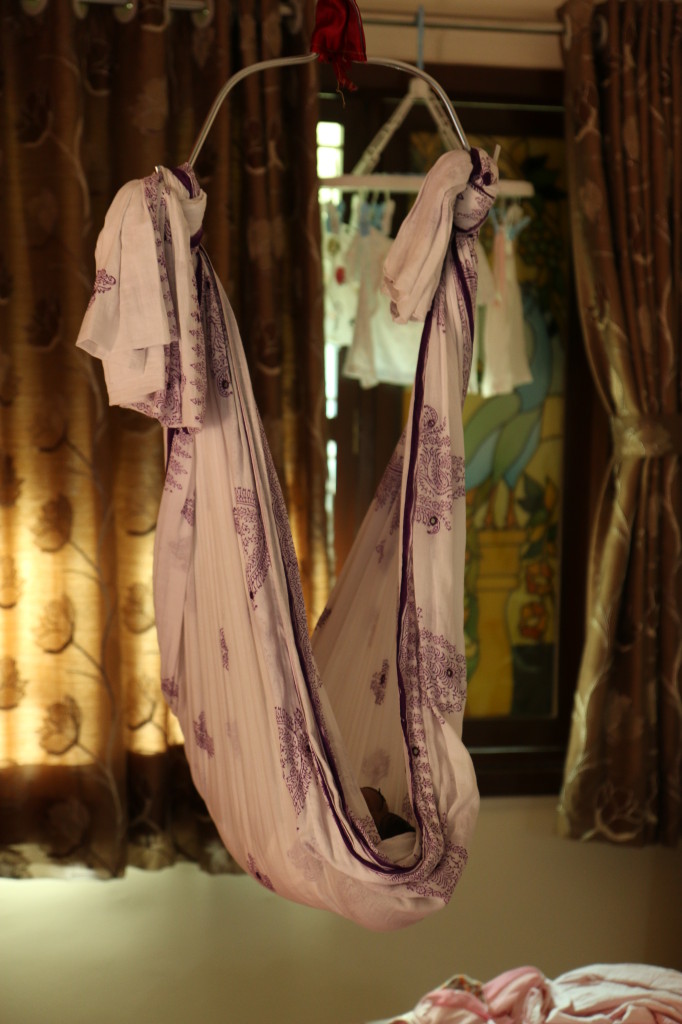 Look at her swing all by herself..